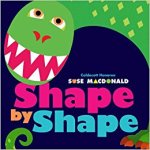 Dinosaurs
Dinosaurs lived long ago
Some walked (stomp feet)
Some swam (pretend to swim)
Some flew you know (flap arms)
Some where big (hold hands out to the side)
Some where small (lower hands to the floor)
Some were gigantic
And very, very tall (raise hands up)

We are the Dinosaurs by Laurie Berkner 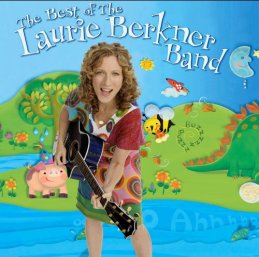 This song has been turned into a book but unfortunately it wasn’t available in time for my program. This is such a fun song to march and roar to. I can’t wait to read the book!

Dotty the Dinosaur
I originally got the idea after seeing Read It Again!’s post. The great thing about Dotty the Dinosaur is that you can adjust it. I had some fruit and vegetable felt pieces on hand and made my dinosaurs to match them. The dinosaurs can be used for so many things! My co-worker used them while doing a storytime about colors. 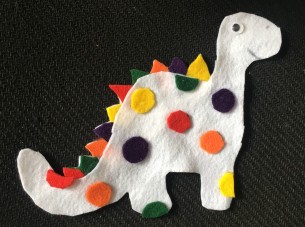 Dotty the Dinosaur loves to eat things like peas!
That is why the color of her skin is a lovely green.

One day she sees some strawberries and apples.
She eats them all day long.
Later that day Dotty turns a bright red.

(continue with other fruits/vegetables and colors)

Dotty couldn’t decide which color she likes best.
So Dotty eats everything.
Her skin an awful mess?

No, Dotty now has dots of color everywhere.
Dotty now was different but Dotty didn’t care.

Dotty loves her new skin, she likes it a lot.
Now she is the only dinosaur with a coat of polka dots!

I found shapes to be a more difficult storytime concept than I originally thought. It’s extremely important for kids to recognize shapes because it is how they differentiate letters. I received a lot of children under the age of 3 for this program and the storytime turned into more of an exercise for the parents on how they can point out and talk about shapes at home with their children. I hope the parents gained some valuable information from this storytime! This theme would have been better offered to preschool or kindergarten children. 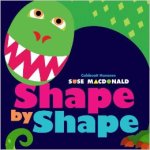 Yoga Shapes
I would love to introduce more yoga into my storytimes, the kids and parents loved it! 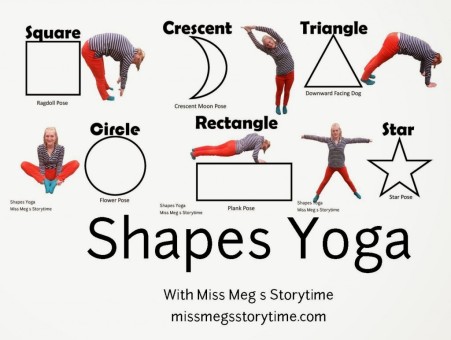 I Can See Shapes (tune: London Bridge)
This is a great song to give each child a shape and have them bring it to the board. Since I had a younger crowd this week parents had to help them. 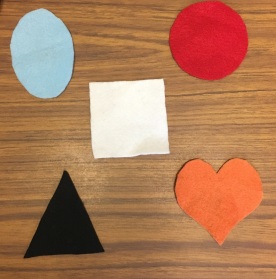 (repeat with other shapes)

Tonight’s family story time had a lot of younger children (under the age of 4) so I cut out the longer book and added in a few more fingerplays, rhymes and action songs. I have two big fears when it comes to doing a dinosaur story time: 1) I can’t pronounce the name properly 2) the kids don’t roar at appropriate times. To nullify my fears I 1) picked all dinosaur related books that did not actually use dinosaur names 2) had a dinosaur puppet that I raised every time I wanted the kids to roar. Over all this was a fun story time, I had a smaller and younger group than usual but they loved roaring and participating in the songs.

My story time helper for the evening!

Dinosaur VS. The Library by Bob Shea

One fell off and bumped his head

“No more dinosaurs jumping on the bed!”

Some flew, you know (flap arms)

Some were big (hold hand high)

Some were small (hold hands low)

Some were gigantic (stretch arms out wide)

And very tall (reach up on tip toes)

If You’re a Big Dinosaur (Tune: If You’re Happy and You Know It)

If you’re a big dinosaur, then give a great big roar